I have been so busy developing my two other websites, I have completely neglected my work on this blog for nearly a year. To my readers, I apologize. I have recently purchased my own RUM domain and will be moving this blog to the new site within the next few months.

My lack of blog posts does not foreshadow a lessened interest in RUM and the RUM industry. I continue to add to my RUM collection, I continue doing samplings/tastings and I continue to follow RUM news.

My latest fascination is the proliferation of RUMs being made in the US and the discontinuance of RUMs from the market. I will probably make these two areas of interest my early focus with the launch of the new site. In the mean time I will highlight some of the new USA crafted RUMs that have caught my eye.

While I have not tried Whistling Andy's RUM is certainly has my curiosity peeked!
Posted by The Rum Trader at 11:04 AM 1 comment: 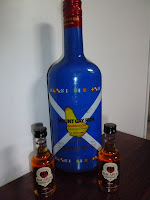 Although I have not posted very much to this blog recently it does not mean that I have stopped buying RUM. I just got back from my local liquor warehouse with these two additions. A specially wrapped, blue label bottle of Mount Gay Eclipse and two mini-bottles of Bacardi's new Oakheart Spiced RUM. I'm always leary about Bacardi RUMs because of their mass-produced nature but I since this one is new I thought I'd at least buy a couple of minis.

Posted by The Rum Trader at 6:21 PM No comments:

Puerto Rico's RUM production has taken a severe hit in the past year with Captain Morgan moving it's production facilities to US Virgin Islands. The estimate loss to the country is $140 million/year.

Club Caribe Distillers, LLC plans to open a new distillery in Cidra, PR that could help offset some of that loss.

The company plans to produce up to 10 million gallons that will include Club Caribe (silver rum), Black Roberts (spiced rum) and Carlos Rum (gold rum). The plan is to distribute to the US market.

The Club Caribe LLC distillery is scheduled to open in early 2012 in the mountain town of Cidra and will produce 2 million gallons of rum its first year as part of a 20-year deal, said senior vice president Alberto Rivera.

The local company is affiliated to Cc1, a Puerto Rican company that distributes Coca-Cola products in the U.S. territory.

Club Caribe expects to employ 25 people and invest $10 million in machinery and equipment as it moves into the old GlaxoSmithKline factory.

The distillery eventually will produce up to 10 million gallons of rum, both to sell in bulk and as private labels including Club Caribe, a white rum; Black Roberts, a spiced rum; and Carlos Rum, a gold rum, Rivera said.

The company will target the U.S. mainland market.

"Vodka is the most consumed liquor in the U.S., but that is changing," Rivera said.

The anticipated production of 2 million gallons next year will eventually generate $20 million in revenue for the island, said Jorge Junquera, deputy executive director of the Puerto Industrial Development Company, a state corporation that promotes business on the island.

The type of affiliation that Club Caribe Distillers, LLC, has with Cc1 is unclear, and a spokeswoman for the company did not clarify the relationship.

Puerto Rico is expected to lose $140 million next year as a result of the lucrative production of Captain Morgan rum moving to the neighboring U.S. Virgin Islands.

In January 2009, liquor company Diageo PLC signed a long-term lease to build a Captain Morgan rum distillery in the Virgin Islands in exchange for a portion of the territory's excise-tax revenue, estimated at $2.7 billion over 30 years.

The distillery opened in late 2010 on the island of St. Croix and is expected to generate more than $100 million a year in revenue for the next 30 years.

"We are losing a mountain of money with Diageo's departure," Junquera said, referring to Diageo terminating its rum production contract in Puerto Rico.

Puerto Rico has argued that its neighbor unfairly lured away business by using revenue from a tax levied on every bottle produced in the two Caribbean territories.

All but 25 cents of the $13.50 in federal excise taxes levied on per proof gallon of rum produced in Puerto Rico and the Virgin Islands goes back to the local governments to spend on infrastructure and public services.

In November 2010, legislators voted to increase the amount of money spent on promoting the island's rum industry from 10 percent to 25 percent of federal excise taxes.

In February, the government awarded Bacardi a $95 million grant to renovate its production plant in exchange for maintaining a minimum level of production for the next 20 years, which translates into more than $230 million in yearly revenue through excise taxes.

Puerto Rico's rum industry employs about 4,500 workers and generates $400 million annually, more than 70 percent of which comes from Bacardi.
Posted by The Rum Trader at 9:46 AM No comments:

A new Jamaican RUM, Blackwell Fine Jamaican Rum, will be washing up on US shores this summer. They recently announced a distribution deal was in place. I wonder how many years I'll have to wait until I find it in my home state of SC? Maybe I'll get lucky and it will be available @ DrinkUpNY.com!

Highly sought-after, yet previously only available in Jamaica, Blackwell's eponymous rum will be available in the United States starting in July 2011. Domaine Select Wine Estates (DSWE) has been named the exclusive importer in the U.S. as Blackwell Rum joins their Classic & Vintage Portfolio. Blackwell Rum will be exclusively distributed in NY and NJ by DSWE's Merchants wholesale division.

Blackwell Rum perfectly captures the essence of Jamaica in beverage form. Referred to as "black gold" among those in-the-know, the rum is the brainchild of Chris Blackwell and advertising industry guru Richard Kirshenbaum, with whom Blackwell has partnered. Raised in Jamaica, Blackwell hails from one of the island's oldest rum producing families. Meanwhile, Kirshenbaum has steered leading beverage brands, including Hennessy, Moet & Chandon, Dom Perignon, Grand Marnier, Guinness, Don Julio, Ciroc Vodka and The Tuscan Wines of Ruffino, among others.

"It is with great pleasure that we announce our partnership with Domaine Select," said Chris Blackwell. "We searched for a well respected industry distributor that has both a stellar reputation and an entrepreneurial spirit, and we have found the perfect partner in this regard with Domaine Select."

"We are thrilled with the addition of Blackwell's Fine Jamaican Rum to our Classic & Vintage Collection," says Paolo Domeneghetti, Founder & C.E.O. of Domaine Select Wine Estates. "With a family history in the rum trade that dates back to the 17th century, we believe that Chris Blackwell himself, together with his unique rum, represents the integrity and rich authenticity that makes this product a natural fit with our portfolio."

DSWE will begin immediate roll out of Blackwell Rum through its distribution network, in major markets across the United States this summer.
Posted by The Rum Trader at 9:37 AM No comments:

I'll have to try this recipe at home:

Shake all ingredients together, strain over a collins glass full of ice and top off with soda water.

-- Recipe from Martin Garcia, Beso/Eve
Posted by The Rum Trader at 1:43 PM No comments: 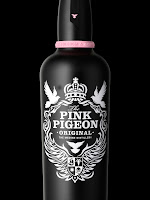 The Indian Ocean Rum Company and Berry Bros. & Rudd Spirits have announced the UK launch of Pink Pigeon, the first super premium, spiced rum from the Island of Mauritius...

...Pink Pigeon spiced rum is named after the rare and endangered bird (of the same name) found on the island of Mauritius.

As part of the conservation effort, Pink Pigeon is a contributor to the Mauritian Wildlife Foundation.


This is kinda fun.

Trivia: Apr 7, 1933 - At the stroke of midnight on April 7, 1933, Prohibition was history,*" the news release reads. "After thirteen years as contraband, “intoxicating liquors” were once again legal. The night before has come to be known as New Beer's Eve and we Chicagoans invite you to kick off Prohibition month with a celebratory round on us

Scented with fresh forest grown Cinnamon, Cloves and citrus blends of essential oils The Spiced Rum Vegan High Lather Bar will fill your shower with an zesty blend of East Indies spices. Made with the finest, sustainably sourced/fair wage, organic plant oils; these bars were produced using the most ethical considerations for the bio-sphere, it's creatures and your family.

We invite you to purchase this bar for your family and we've purposely priced (call it self subsidized) our Allsorts Organic Vegan Soap Bars to demonstrate the value of organic products and as special thank you to our Facebook and Twitter friends who support our carbon neutral goals by voting with their dollar bills. By supporting the use of sundries that do not contain dangerous chemicals and toxins; you promote a healthy lifestyle and begin your own life's adventure by getting a better understanding of what we put down our drains and into our planet.

Each bar is wrapped with an adventure for the curious or student of Chicago Prohibition Era history. Open the wrapper to reveal a detailed adventure that will lead you to the intersection of vice and victim: 13 unlucky years unveiled as you travel through the city's "noble experiment" and witness the creation of The Chicago Outfit and American Organized Crime.